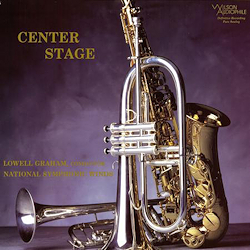 „Center Stage“ – the National Symphonic Winds conducted by Lowell Graham
Format: 2LPs 180g 45rpm / gatefold sleeve
Release month: 2/2021
Manufacturer: Acoustic Sounds
Original label: Wilson Audiophile
Genre: Classical
New from Wilson Audiophile Recordings, „Center Stage“, featuring Lowell Graham conducting the National Symphonic Winds.
These recordings were made in a historic concert hall on the campus of Hampton University in Hampton Roads, VA. The history of the hall parallels somewhat New York’s Carnegie Hall. The musicians in the National Symphonic Winds come from the premier military bands of the United States as well as the Virginia Symphony Orchestra. The result was a superb mix of seasoned and assured professionals for this single, five-hour recording session.
Those who have already enjoyed the 33 1/3 Analogue Productions reissue of Center Stage know why it is an exceptional-sounding audiophile record. Now, cut at 45 RPM, and with wider grooves, you’ll hear sound that’s upgraded from exceptional, to brilliant. There’s more depth and space to the orchestra as a whole, as well as individual instruments. This disc sports more detail, more human presence, more of what we as audiophiles, listen for.
Lowell Graham, a graduate of the University of Northern Colorado, was also the first to be awarded the Doctor of Musical Arts degree in orchestral conducting from the Catholic University of America. He has led orchestras and bands in performances throughout the world, and he’s the current conductor and commander of the United States Air Force Tactical Air Command Band.
Recorded with minimal miking (Sennheiser), directly to 2-track half-inch, 30 ips tape using arguably the finest 2-track analog recorder in the world — the Wilson Ultramaster — a highly-modified Studer tape deck with custom-designed electronics designed by John Curl. To accomplish this difficult, time pressure recording, the recording engineering skills of the renowned Bruce Leek were employed.
The extreme dynamic range of the music remains intact as well as the soundstage and timbre of the ensemble remaining completely natural. There is no added enhancement to the concert hall’s natural reverberation. When raising the volume, be careful as these real world dynamics can be harmful to playback equipment if care is not taken.
The musical repertoire was chosen to be user friendly, vivid, colorful and impactful. Selections from Tony-winning stage classics „Barnum“, „West Side Story“ and „Oklahoma“ are joined by compositions from John Williams, including „Olympic Fanfare“ composed for the 1984 Olympic Games. Selections from the Walt Disney favorite „Mary Poppins“ include „Spoonful Of Sugar“, „Chim Chim Cheree“ and more. These significant recordings hold a distinctive place in the audio and musical world.