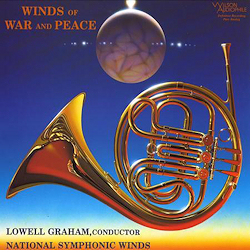 „Winds Of War And Peace“ – the National Symphonic Winds conducted by Lowell Graham
Format: 2LPs 180g 45rpm / gatefold sleeve
Release month: 2/2021
Manufacturer: Acoustic Sounds
Original label: Wilson Audiophile
Genre: Classical
On „Winds Of War And Peace“, conductor Lowell Graham takes the National Symphonic Winds ensemble through a program of stirring orchestrations and marches. „Liberty Fanfare“ was composed for the centennial celebration of the Statue of Liberty in 1986. The fanfare set the stage for one of the most spectacular celebrations in America’s history. Samuel Barber’s „Commando March“ composed in 1943, represents Barber’s first band work. Written in a quadruple meter, this work utilizes the constant contrast of dotted and triplet rhythms. Roger Nixon’s „Festival Fanfare March“ was recognized for superb composition by the American Bandmasters Association in 1973. It is a work that’s technical, bright in color and effervescent in spirit. The album also includes „Victory at Sea“, „El Camino Real“, „A Santa Cecilla“ and „Symphonic Dance No. 3“.
Although the 33 1/3 reissue of this recording by Analogue Productions was outstanding, our 45 RPM version raises the quality bar even higher. With wider grooves, you’ll hear sound that reveals more depth and space to the orchestra as a whole, as well as individual instruments. This disc sports more detail, more human presence, more of what we as audiophiles, listen for.
Graham, a native of Greeley, Colorado, has earned recognition as one of America’s most talented young conductors. He graduated from the University of Northern Colorado with both his Bachelor of Arts and Master of Arts degrees. He was also the first person to be awarded the Doctor of Musical Arts Degree in Orchestral Conducting from the Catholic University of America.
Graham has led orchestras and bands on record and in performance throughout the world. He is the current conductor and commander of the United States Air Force Tactical Air Command Band.