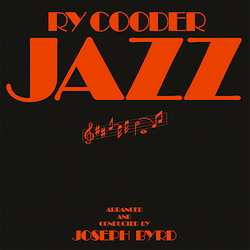 „Jazz“ – Ry Cooder (g, voc); Harvey Pittel (as); Randy Aldcroft, George Bohanon (tb); Red Callendar (tba); John Rodby, Earl Hines (p); Barbara Starkey (org); David Lindley (bjo); Tom Collier (mar); Chuck Domanico (b); Mark Stevens (dr); a.o.
When someone such as Ry Cooder, who delved deeply into traditional sources, just names his LP „Jazz“, it is unlikely that one will hear avant-garde music. Actually, in the numbers gathered together here the investigative guitar man dedicated himself more or less to almost forgotten music. Historically informed, yet not adhering to the original instrumental ensemble, this ostensibly antiquated music enjoys a brilliant renaissance. Just like in an album of charming black and white photographs, the old-fashioned style shines out brightly, such as in „Big Band Bill“, which (hardly by accident) is modelled on the jaunty swing of Django Reinhard, but does not imitate him. Cooder’s slightly acidic-sounding guitar mixes homogeneously with the delightfully rustic sound of the tuba and a bluegrass mandolin („Face To Face…“). The typical Caribbean rattle of the marimba enters into a pleasant dialogue with the warped sound of the slide guitar. Folksy bliss in three-four time („Happy Meeting In Glory“) stands confidently on a par with the merry, self-willed saxophone („In A Mist“) and with the poetic, dreamy and meditative guitar („Flashes“). And just listen to how the classic number „Davenport Blues“ – with its emphasis on the woodwinds – grooves along with the vibraphone and tingly inner parts. This sound is both filled with the spirit of Bix Beiderbecke and, based loosely on Mingus, will sooth the Jelly Roll Morton-soul of its fans.