Joe Walsh: The Smoker You Drink, The Player You Get (45rpm-edition)

Joe Walsh: The Smoker You Drink, The Player You Get (45rpm-edition) 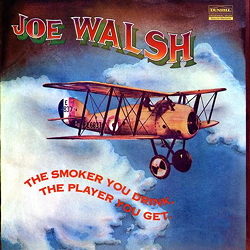 „The Smoker You Drink, The Player You Get“ – Joe Walsh (g. voc, keyb); Rocke Grace (keyb, voc); Kenny Passarelli (b, voc); Joe Vitale (dr, fl, voc, keyb); Joe Lala (perc); Clydie King, Venetta Fields (voc)
Format: 2LPs 180g 45rpm / gatefold sleeve
Release month: 3/2021
Manufacturer: Acoustic Sounds
Original label: ABC
Genre: Pop
In between his stints with the James Gang and the Eagles, Joe Walsh tackled his second solo studio album „The Smoker You Drink The Player You Get“ which became his most successful solo outing. The 1973 LP continued the heavy and light rock mix of tracks found on his previous release, „Barnstorm“.
Analogue Productions has done reissue justice to the album that AllMusic decries »features some of the most remembered Joe Walsh tracks, but it’s not just these that make the album a success. Each of the nine tracks is a song to be proud of. This is a superb album by anyone’s standards.«
To obtain the best sound possible we turned to Kevin Gray at Cohearent Audio to remaster this superb album from the original analog tapes. Next we plated the lacquers and pressed LPs on 200-gram audiophile vinyl at the world’s best LP maker, Quality Record Pressings. Top it all off with a deluxe Stoughton Printing tip-on jacket and you’ve got the makings for audiophile joy.
But would we stop there? Hardly. Now with our 45 RPM release, the best-sounding version of this rock music gem gives listeners an even richer sonic experience. The dead-quiet double-LP, with the music spread over four sides of vinyl, reduces distortion and high frequency loss as the wider-spaced grooves let your stereo cartridge track more accurately.
This amazingly eclectic rock gem has Joe’s smash „Rocky Mountain Way“, his hit „Meadows“, plus „Bookends“, „Wolf“, „Dreams“ and more! Walsh’s abililty to swing wildly from one end of the rock scale to the other is unparalleled and makes for an album to suit many tastes.