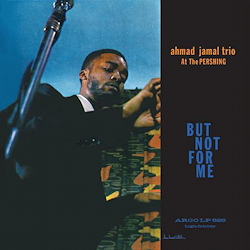 „At The Pershing“ – Ahmad Jamal (p); Israel Crosby (b); Vernell Fournier (dr)
This is one of the best-selling jazz records ever. But among audiophiles, it may not be as well known as some of the other genre classics.
Jazz pianist, composer, bandleader, Grammy-nominee, and Kennedy Center legend Ahmad Jamal has for five decades been one of the most successful small-group leaders in jazz and one of the genre’s all-time great pianists. His artisty, talent and creative abilities have thrilled audiences and been broadly proclaimed by musician and music lover alike. „At The Pershing: But Not For Me“ is Jamal’s dazzling fountain of creative splendor in full flow.
In 1956 Jamal’s new trio (with Israel Crosby on bass and Vernell Fournier on drums) began a residency at Chicago’s Pershing Hotel, and two years later the group recorded „At The Pershing: But Not For Me“, which spent 108 weeks among the Top Ten best selling albums. Recorded on Jan. 16, 1958 at the Pershing Lounge in the hotel, each set played that night was recorded for a total of 43 tracks, eight of which were selected by Jamal for the album.
AllMusic rates the album 4 stars, calling it a turning point in Jamal’s career. The album became one of the best-selling records in the history of the Chess Records label. But it’s often forgotten that a jazz pianist called Ahmad Jamal played a major role in filling up the label’s coffers and widening its audience.
Jamal, from Pittsburgh, was a child prodigy who started playing piano at age 3 and, as a teen, caught the ear of jazz great Art Tatum. Then, after moving to Chicago, in 1948, he was eventually discovered by visionary record producer John Hammond. Hammond gave Jamal his first shot at recording in 1951, but it was seven years later, when the pianist was signed to Chess Records, that his career truly skyrocketed.
„At The Pershing: But Not For Me“ topped America’s jazz charts for months and established a 107-week residence in Billboard’s album charts.
»That album sold over one million copies and is still selling«, Jamal says. He attributes its success to the power of music. »It’s contagious. Music belongs to the world. So something that is of value, whether it’s Ravel’s Boléro or, specifically, „At The Pershing“, the world listens. And if it’s good, you’re going to get one or two listeners… and I got a few more than two!«
The Analogue Productions reissue LP you hold has matchless listenability, employing steps calculated to extract the highest-quality transfer and playback from the original master tape. Mastering took place at Sterling Sound, while plating and 200-gram pressing is by our own Quality Record Pressings, where the best-sounding LPs with dead-quiet surfaces are produced. A Stoughton Printing old-style tip-on jacket completes the package.
Format: 1LP 200g 33rpm / standard sleeve
Release date: 28.04.2020
Manufacturer: Acoustic Sounds
Original label: Argo
Genre: Jazz