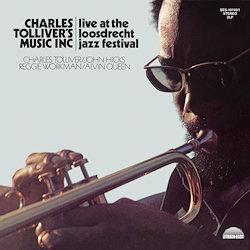 „Live At The Loosdrecht Jazz Festival“ – Charles Tolliver (tp, flh); John Hick (p); Reggie Workman (b); Alvin Queen (dr)
Charles Tolliver began his professional career and simultaneously his recording debut with the saxophone giant Jackie McLean on Blue Note Records in 1964. Since then he has become one of the all-time preeminent trumpeters in Jazz as well as one of its most gifted composer/arranger bandleaders. He is also a Grammy nominated recipient for his Blue Note Records recording „With Love“.
With a career that has spanned five decades he has recorded and/or performed with such renowned artists as Roy Haynes, Hank Mobley, Willie Bobo, Horace Silver, McCoy Tyner, Sonny Rollins, Booker Ervin, Gary Bartz, Gerald Wilson Orchestra, Oliver Nelson, Stanley Cowell, Herbie Hancock, Andrew Hill, Louis Hayes, Roy Ayers, Art Blakey & the Jazz Messengers, and owned the trumpet chair with the great Max Roach for some years.
This LP is jazz of high energy and high sincerity. Jazz at it’s best. One of Tolliver’s (and jazz’s) masterpieces. It is a live recording from 1972. On another occasion, Tolliver recorded with another quartet with Stanley Cowell on piano, and some critics prefer that quartet. However, this quartet is the equal of that one. I think John Hicks did a masterful job of piano playing here. Hicks equalled Charles in energy. The bass playing of Reggie Workman (who was John Coltrane’s bassist) is equally smouldering. Drummer Alvin Queen is a perfect match for the other three.
Tolliver’s music (which holds on to one’s attention throughout the live set) has its connections to the bebop tradition but also forges ahead and can be quite passionate. Recommended.