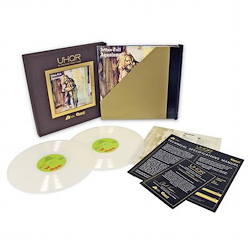 AS AUHQR 003
Jethro Tull: Aqualung (45rpm-edition)
Format: 2LPs 200g 45rpm / Box, booklet
Release month: 11/2020
Manufacturer: Acoustic Sounds
Original label: Chrysalis
Genre: Pop
Analogue Productions, the audiophile in-house reissue label of Acoustic Sounds, Inc., together with Quality Record Pressings, is reintroducing one of the most revered brands in LP history — the Ultra High Quality Record (UHQR), originally introduced by JVC Japan in the 1980s!
Analogue Productions presents another UHQ classic title — Jethro Tull’s multi-platinum-selling smash „Aqualung“. Originally released in March 1971, the album has sold in excess of 7 million copies worldwide, achieving Top Ten chart status in both the U.K. and U.S.. „Aqualung’s“ success signaled a turning point in the band’s career, making Jethro Tull a major radio and touring act.
Recorded at Island Records‘ studio in London, it was their first album with John Evan as a full-time member, their first with new bassist Jeffrey Hammond, and last album featuring Clive Bunker on drums. „Aqualung“ is regarded, despite the band’s disagreement, as a concept album featuring a central theme of »the distinction between religion and God«. Something of a departure from the band’s previous work, the album features more acoustic material than previous releases; and-inspired by photographs of homeless people on the Thames Embankment taken by singer Ian Anderson’s wife Jennie-contains a number of recurring themes, addressing religion along with Anderson’s own personal experiences.
This UHQR is remastered by Chris Bellman at Bernie Grundman Mastering from the original analog master tapes. Each UHQR will be pressed at Acoustic Sounds‘ industry-leading pressing plant Quality Record Pressings (QRP) using hand-selected Clarity Vinyl® on a manual Finebilt press with attention paid to every single detail of every single record. The 200-gram records will feature the same flat profile that helped to make the original UHQR so desirable. From the lead-in groove to the run-out groove, there is no pitch to the profile, allowing the customer’s stylus to play truly perpendicular to the grooves from edge to center. Clarity Vinyl allows for the purest possible pressing and the most visually stunning presentation. Every UHQR will be hand inspected upon pressing completion, and only the truly flawless will be allowed to go to market. Each UHQR will be packaged in a deluxe box and will include a booklet detailing the entire process of making a UHQR along with a hand-signed certificate of inspection. This will be a truly deluxe, collectible product.