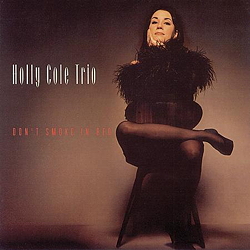 „Don’t Smoke In Bed“ – Holly Cole (voc); Aaron Davis (p); Howard Levy (hca); David Piltch (b, perc) & strings
Holly Cole brings her own dimension to the tradition of cabaret, a strong voice that’s still capable of nuance, an ear for quirky repertoire, and a light touch that keeps some of these performances floating just at the edge of irony.
On her second album, 1993’s „Don’t Smoke In Bed“, Cole explores varied musical styles, adding pop, blues, country and a French ballad to her standard, low-key jazz. It’s a favorite of ours, which is why for this Analogue Productions reissue we’ve given it the reissue treatment it deserves. Bernie Grundman did the mastering, from the original analog tapes, at his Los Angeles studio, giving this release a spectacular foundation. Plating and pressing on 200-gram heavyweight vinyl was done by Gary Salstrom and crew at Quality Record Pressings, makers of the world’s finest-sounding LPs. Lastly we wrapped up the whole package in a premium gatefold tip-on jacket from Stoughton Printing. There’s nothing but aces in this smokin‘ hot reissue and the quality shines through.
Holly’s delivery of more traditional fare shines on Cole Porter’s witty „Get Out Of Town“ and Kurt Weill’s torchy „Je Ne T’aime Pas“, while she brings clarity, power, and anthemic passion to the surprising treatment of Johnny Nash’s „I Can See Clearly Now“. She’s generally well supported in this intimate set by pianist Aaron Davis and bassist Davd Piltch, while there’s sparing and effective use of strings. There are fine guest spots by tenor saxophonist Joe Henderson, on „Everyday Will Be Like a Holiday“, and David Lindley, whose steel guitar contributes to the strange country music of „Don’t Let The Teardrops Rust Your Shining Heart“.