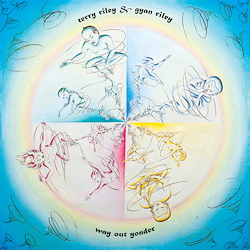 „Way Out Yonder“ – Terry Riley (p, voc, melodica, electronics); Gyan Riley (g)
„Way Out Yonder“ is the second live release from Terry Riley & Gyan Riley, the duo comprised of iconic American composer and minimalist pioneer Terry Riley and his guitarist/composer son Gyan Riley. The album is comprised of spontaneous improvisations and compositions by both Terry and Gyan, captured during three performances in Canada, Japan and the US, and features the elder Riley on piano, voice, melodica and electronics. The album artwork was created by Barbara Falconer, who also painted the cover of Riley’s landmark 1978 release, „Sri Camel“. The album is receiving its first ever vinyl pressing on this double LP release, which was mastered for vinyl by Dave Gardner at Infrasonic Mastering