The Sound Of Stokowski And Wagner

The Sound Of Stokowski And Wagner 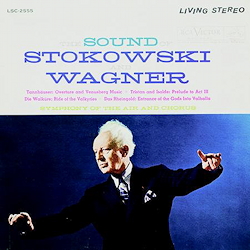 „The Sound Of Stokowski And Wagner“ Richard Wagner: „Walküre“ Act III „Ride Of The Valkyries“; „Tristan And Isolde“ Prelude To Act III; „Das Rheingold“ „Entrance Of The Gods Into Valhalla“; a.o. – the Symphony Of The Air | Leopold Stokowski
Genre: Classical
Format: 1LP 200g 33rpm / standard sleeve
Release date: 15.12.2019
Manufacturer: Acoustic Sounds
Original label: RCA
Analogue Productions‘ RCA Living Stereo Reissue Series No. 2, with 25 newly remastered mainstay classical albums, will delight and astound your ears with their clarity and warm, rich tone. As with our first highly-regarded LSC series, shortcomings of previous editions have been improved upon — from the mastering, to the LP pressing, to the sharp-looking glossy heavyweight Stoughton Printing tip-on jackets that faithfully duplicate the original artwork, „Living Stereo“ logo, „Shaded Dog“ label and all!
Mastered by Ryan K. Smith at Sterling Sound from the original 3-track master tapes, cut at 33 1/3, and plated and pressed at Quality Record Pressings — makers of the world’s finest-sounding vinyl LPs, — no other editions match these for the quietest 200-gram platters available.
Stokowski was the first conductor to become a true superstar. He was regarded as something of a matinee idol, an image aided by his appearances in such films as the Deanna Durbin spectacle „One Hundred Men And A Girl“ (1937) and, most famously, as the flesh-and-blood leader of the Philadelphia Orchestra in Walt Disney’s animated classic „Fantasia“ (1940). As conductor of the Philadelphia Orchestra he popularized an entirely new orchestral sound known as the „Philadelphia Sound“ or the „Stokowski Sound“. Its foundation was a luxuriant, sonorous tone and an exacting attention to color. He pioneered the use of ‚free‘ bowing, which produced a rich, homogenized string tone