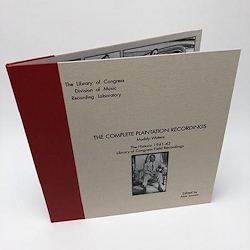 „The Complete Plantation Recordings“ – Muddy Waters (voc, g) & company
Blues legend Muddy Waters, born McKinley Morganfield in Rolling Fork, Mississippi, was a sharecropper/tractor driver, and a local blues guitarist when in 1941-42 fate intervened. The Library of Congress had started its systematic series of field recordings of American traditional music and on a 1941 recording trip through the Delta, led by Alan Lomax and John Work III, they came upon the 26-year-old Muddy, recorded him at his home with a small accompanying combo (guitar, mandolin and violin), and made music history.
Muddy had played harmonica since his early childhood, and learned guitar in his teenage years; his primary musical influence was Son House. A year later in 1942, Lomax made his second trip through the Delta recording the remainder of the tracks, including more of Muddy’s songs. The following year, at age 28, Muddy moved to Chicago and a blues legend was born. Muddy Waters would go on to win six Grammy Awards and become an incalculable influence on not just the blues, but rock ‘n‘ roll.
Analogue Productions is honored to present „The Complete Plantation Recordings“ as a newly mastered 33 1/3 200-gram LP reissue. This numbered, deluxe edition, pressed at Quality Record Pressings, is limited to 1,000 copies. The songs presented represent everything listed by the Library of Congress as recorded by Muddy Waters during these historic sessions.
For this reissue the original metal disc recordings created by Lomax were the source for a high-res 192kHz digital file used by Sterling Sound’s Ryan K. Smith to master this edition.
»The file was made from the original parts; it’s the highest quality of these recordings that’s ever been released,« Chad Kassem, owner of Analogue Productions and Quality Record Pressings, says.
In addition to the flat and impeccably silent 200-gram 2LPs pressed at QRP in this limited edition set, we’ve seen to it that the packaging is exemplary. The highest-quality Stoughton Printing gatefold jacket is wrapped in a linen cover, evoking the linen cover of the five-album set released by the Library of Congress initially in 1942 as „Folk Music of the United States Album IV — Afro American Blues and Game Songs“, where some of these tracks by Muddy first appeared.
The recorders of the time were cumbersome. Weighing as much as 350 pounds, they were piles of iron, wire and steel — plus two batteries weighing 75 pounds each — and a microphone. Magnetic tape had yet to be utilized; the machines recorded onto scores of blank aluminum and celluloid discs.
Both Lomax and Work’s voices can be heard on the recordings conducting portions of interviews with Muddy. »I was the editor of the first five-album set, and my opinion of Muddy was so good that we included TWO of his songs,« Lomax said later. »I couldn’t make up my mind which of his two blues were best, so we put them both in.«