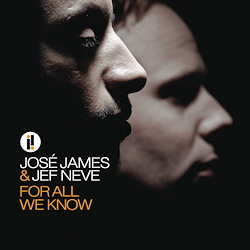 „For All We Know“ – José James (voc); Jef Neve (p)
Fans of vocalist José James have hardly had time to catch their breath in 2010. His new-school R&B album „Blackmagic“ (a sophomore effort released in March 2010 on Gilles Peterson’s Brownswood imprint) was still being fired by DJs in clubs and on European and Japanese radio, while garnering acclaim globally. Barely two months later, James popped this set out in May. „For All We Know“ is a duet recording with Belgian jazz pianist Jef Neve. It’s James‘ first album to be released in the United States — his home country — and the first of newly recorded material on Impulse! Records in six years. Musically, this set couldn’t be more different from his two preceding offerings. There are no star productions by Flying Lotus, Nicola Conte, Moodymann, or Jazzanova this time out. This intimate nine-track collection of standards from the Great American Songbook was produced by the duo who made it. All but one cut was recorded in a single six-hour session, and the majority of these performances are first takes. This is a ‚pure‘ jazz recording. James and Neve pull out heavy hitters from the repertoire, „Autumn in New York“, the Gershwins‘ „Embraceable You“, „Body and Soul“, and Duke Ellington’s „Just Squeeze Me“ among them. James — who studied and played with jazz greats Chico Hamilton and Junior Mance — is not overly reverent, but he is disciplined as well as innovative. Neve’s pianism pushes that envelope a little further still. His light touch, elegant harmonics, and subtly innovative fills and solos give James all the support and room he needs. Listen to this version of Billy Strayhorn’s „Lush Life“. At over seven minutes, its graceful melody is taken deeply inside his rich, warm, sometimes arid baritone (the same way John Coltrane took it inside his horn — this tune is a tribute to him) and brought out again as a compact universe of mystery, imagination, and marvelously diverse ethereal textures with Neve creating enough intuitive space around it to make it possible. The duo’s reading of „When I Fall in Love“ is downright moving. It holds no trace of the nostalgia usually associated with its many interpretations. James is able to express the deep yearning in the lyric and melody without over-emoting. For jazz fans who’ve not heard him, this album is a very new turn on some well-worn music by a major talent. For James‘ fans — who all knew he could sing like this — „For All We Know“ adds a different kind of depth and dimension to his established recorded oeuvre thus far.