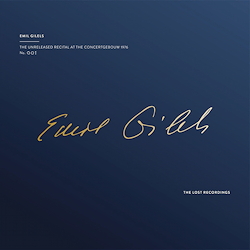 „The Unreleased Recital At The Concertgebouw 1976“: Werke von Ludwig v. Beethoven, Johannes Brahms, Robert Schumann, Sergei Prokofiev and Johann Sebastian Bach – Emil Gilels (p)
Format: 2LPs 180g 33rpm / gatefold sleeve
Release month: 9/2021
Manufacturer: The Lost Recordings
Original label: The Lost Recordings
Genre: Classical
»In June 2017, I was due to perform in Moscow when I met Kirill Gilels, the grandson of the famous pianist Emil Gilels. He listened to what our Phoenix Mastering® restoration process, can achieve, and made the decision to entrust us with the results of several years of research: he gave us a list of dates and places of the previously unreleased recordings of his grandfather.
In Berlin, Moscow and Saint Petersburg, we came across a treasure trove, stunning in terms of both the quality and consistency of Emil Gilels’s playing. We were fully aware that he was one of the greatest musicians of the twentieth century.
It was in Amsterdam where at last, we succeeded in extracting this fabulous recital from 1976 at the Concertgebouw – recordings that had fallen into oblivion.
We were allotted a studio where we listened to the tapes one by one, we did not utter a word, so overcome were we by the beauty of what we heard.«
(F. D’Oria-Nicolas)
Considered one of the most important pianists of the twentieth century, he was a pupil of H. Neuhaus. He wins the current Queen Elizabeth Competition in Brussels and takes on an international stature. In 1955, he was the first artist to be welcomed in the United States since the war: if the public, somewhat circumspect of Carnegie Hall, in New York, accompanies his entry on stage of a troubled silence, it is under a thunder of uninterrupted applause that he will refuse to leave the stage!