Highlights From Rubinstein at Carnegie Hall

Highlights From Rubinstein at Carnegie Hall 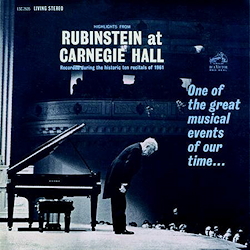 „Highlights From Rubinstein at Carnegie Hall“ Works by Claude Debussy, Karol Maciej Szymanowski, Sergei Prokofiev, Heitor Villa-Lobos – Arthur Rubinstein (p)
Format: 1LP 200g 33rpm / standard sleeve
Release date: 15.04.2020
Manufacturer: Acoustic Sounds
Original label: RCA
Genre: Classical
Analogue Productions‘ RCA Living Stereo Reissue Series No. 2, with 25 newly remastered mainstay classical albums, will delight and astound your ears with their clarity and warm, rich tone. As with our first highly-regarded LSC series, shortcomings of previous editions have been improved upon — from the mastering, to the LP pressing, to the sharp-looking glossy heavyweight Stoughton Printing tip-on jackets that faithfully duplicate the original artwork, „Living Stereo“ logo, „Shaded Dog“ label and all!
Mastered by Ryan K. Smith at Sterling Sound from the original 3-track master tapes, cut at 33 1/3, and plated and pressed at Quality Record Pressings — makers of the world’s finest-sounding vinyl LPs, — no other editions match these for the quietest 200-gram platters available.
It’s easy to take Arthur Rubinstein for granted. One of the mightiest pianists of the 20th Century, the Polish-born artist lived for 95 years, debuting in 1894 at age 7, and retiring from the concert stage 82 years later. His playing was infused with a deep connection to the music, a golden singing touch, and a particular, elusive quality that combined gentility, warmth, intimacy, and insouciance. Many pianists today have some and perhaps even all of those qualities, but the Rubinstein blend was a very special je ne sais quoi that seems to belong to artists born in the era that was wiped out by the World Wars.
He was a dynamo. At age 64, he played seventeen concertos in a five-concert series in New York that spanned a period of 12 days. But for New York audiences, the most amazing Rubinstein year was 1961, by which time the artist was in his 74. Starting on January 17 that year, and concluding on December 10th, Rubinstein played ten recitals at Carnegie Hall. All were sellouts or near sellouts, tickets in such demand that audience members were also seated on the stage.
His reviews were rapturous; his audiences, enraptured. Standing ovations preceded the first note on the program and elicited multiple encores after the last. The Times paid tribute to Rubinstein’s feat in an editorial on December 11th: »Arthur Rubinstein concluded his massive series of ten piano recitals last night in Carnegie Hall. But they were more than piano recitals. They were an attitude toward life – the expression of a civilized man who, in creating and recreating beauty throughout his life, has refused to grow old.«