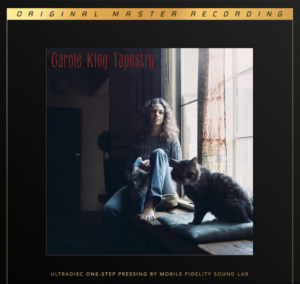 Carole King – Tapestry
180g 45RPM 2LP Box Set
MFSL45UD1S-030
Carole King’s Tapestry is the rare record that plays in your head the moment its title, cover art, or songs are mentioned. Ranked the 25th Greatest Album of All Time by Rolling Stone, it is the singer-songwriter LP you’d bring to the proverbial desert island if you were limited to one choice. Renowned for its lifelike production, Tapestry sounds clearer, richer, and more emotional than ever courtesy of Mobile Fidelity’s UltraDisc One-Step reissue.

Commemorating the record’s 50th anniversary in collaboration with SME/Legacy Recordings, mastered from the original master tapes, cut at 45RPM, pressed on MoFi SuperVinyl at RTI, and limited to 10,000 copies, the iconic audiophile label’s UD1S 180g 45RPM 2LP box set remains faithful to original album producer Lou Adler’s vision of making King (and not just any pianist player) appear seated and playing just for you. Friends, this is the edition that brings King right before your eyes and into your room.

Visually, the lavish packaging and gorgeous presentation of the UD1S Tapestry befit its select status. Housed in a deluxe box, it features special foil-stamped jackets and faithful-to-the-original graphics that illuminate the splendor of the recording. No expense has been spared. The UD1S set exists as a curatorial artifact meant to be preserved, touched, and examined. It is made for discerning listeners that prize sound quality and production, and who desire to fully immerse themselves in the art – and everything involved with the album, from the images to the finishes.

Aware of how many times this iconic work has been re-released, Mobile Fidelity engineers ensured this UD1S edition benefits from lifelike spaciousness, presence, fullness, dynamics, and openness. The wider grooves allow more information to reach your ears, and MoFi SuperVinyl means the noise floor is as absolutely low as possible. The results mirror what went down in A&M Studios: Lean, simple, direct, and so nakedly real the sonics evoke what might be heard on a professional demo tape.

King’s personal singing, her graceful pianism, and the integral rhythmic foundation provided by the likes of drummer Russ Kunkel and guitarist Danny Kortchmar – and the contributions of guest instrumentalists ranging from saxophonist Curtis Amy to guitarist James Taylor – resonate with three-dimensional imaging and cozy realism. Every note, and every basic movement, is accurately rendered with exquisite detail and full-bodied tonality.

Indeed, one reason Tapestry endures – apart from the flawless songwriting, earnest deliveries, and eloquent performances – owes to the naturalness of the production and songs. King’s articulations on love, conviction, friendship, place, sadness, and companionship ring true because there’s no doubting their meaning, intent, or sincerity. Tapestry makes you feel. It compels you to get closer to the music and the musicians performing. It is an album of organic nuances, suggestive intents, and engaging melodies.

Classics such as „You’ve Got a Friend,“ „I Feel the Earth Move,“ „Will You Still Love Me Tomorrow,“ and „(You Make Me Feel Like) A Natural Woman“ resonate because they address universal sensibilities and the human condition. They, like all of Tapestry, are relaxed yet emancipating, strong yet mellow, comfortable yet terrifically beautiful and lastingly unique. Four major Grammy Awards, four Top 10 singles, and worldwide sales of more than 25 million copies just seem like icing on the cake.

There’s only one Tapestry, and Mobile Fidelity’s collectible UD1S version weaves together all its elements in incomparable fashion. Secure your lowest-numbered copy today!