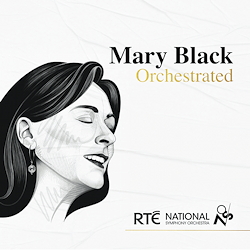 „Orchestrated“ – Mary Black (voc); Brian Byrne (cond); Pat Crowley (p, acc); Declan Sinnott (g); Carl Geraghty (sax); Frank Gallagher (v); Garvan Gallagher (b); Noel Bridgeman (dr, perc); u.a. & RTÉ National Symphony Orchestra
Format: 1LP 180g 33rpm / gatefold sleeve
Release month: 3/2021
Manufacturer: Pure Pleasure
Original label: 3ú Records
Genre: Pop
For over thirty years, singer Mary Black has been a dominant presence in Irish music, both at home and abroad. During that time, she has released 12 studio albums, all of which achieved platinum sales status and spawned countless hits. On October 2019, she has released an album unlike anything she has done before; „Mary Black Orchestrated“. This album is a reimagining of 11 of Mary’s favourite songs, orchestrated and produced by world renowned musician and composer Brian Byrne. The album features the RTÉ National Symphony Orchestra, conducted by Byrne and is a stunning reinterpretation of songs like „No Frontiers“, „The Urge For Going“, „Summer Sent You“ and „Carolina Rua“.
Music is at the heart of things for Mary and embarking on this Orchestrated album is something she’s greatly enjoyed. »What a great honour to have some of my favourite recordings orchestrated by the National Symphony Orchestra conducted by Brian Byrne at the National Concert Hall. I’ve picked songs that mean a lot to me, some well-known and other less known gems. I couldn’t imagine how great they would turn out with Brian Byrne composing some stunning orchestral arrangements that have breathed new life into these songs. Hearing the RTE Orchestra perform them during recording in the NCH was truly moving for me. I’m really excited for the fans to hear this album« – Mary