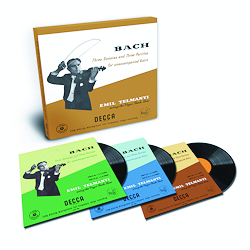 Johann Sebastian Bach: Sonatas for Violin Solo No.1 in G minor BWV1001, No.2 in A minor BWV1003, No.3 in C Major BWV1005; Partitas for Violin Solo No.1 in B minor BWV1002, No.2 in D minor BWV1004, No.3 in E Major BWV1006 – Emil Telmányi (v)
There are at least three major virtues: the recording and surfaces are faultless, Telmányi’s performances range from good to superlative, and a most interesting endeavour has been made to approximate to the instrument Bach had in mind when originally writing the works … Broadly, then, the effect of the bow is to make the audible music correspond much more closely to its appearance on paper; and the works really do, in the places concerned, take on a new lease of life. But Telmányi goes beyond just demonstrating the new bow; he has mastered it and made it his servant. And he uses it to give wonderful performances of the exhaustingly difficult works. Telmányi, again following the shape of his bow, presents the Chaconne as an enormous arch; it is wholly satisfying.
Gramophone