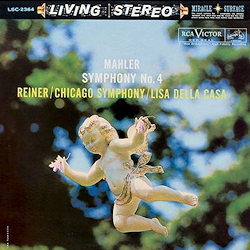 Gustav Mahler: Symphony No. 4 in G major – the Chicago Symphony Orchestra conducted by Fritz Reiner
Analogue Productions‘ RCA Living Stereo Reissue Series No. 2, with 25 newly remastered mainstay classical albums, will delight and astound your ears with their clarity and warm, rich tone. As with our first highly-regarded LSC series, shortcomings of previous editions have been improved upon — from the mastering, to the LP pressing, to the sharp-looking glossy heavyweight Stoughton Printing tip-on jackets that faithfully duplicate the original artwork, „Living Stereo“ logo, „Shaded Dog“ label and all!
Mastered by Ryan K. Smith at Sterling Sound from the original 3-track master tapes, cut at 33 1/3, and plated and pressed at Quality Record Pressings — makers of the world’s finest-sounding vinyl LPs, — no other editions match these for the quietest 200-gram platters available.
Mahler’s Fourth and „Das Lied Von Der Erde“ were Reiner’s only Mahler recordings with the Chicago Symphony, and both are reminders of his orchestral wizardry and his prowess as a Mahlerian. Tempos are on the swift side for a piece many conductors like to linger over, but the forward flow doesn’t obscure telling details. Reiner gives the slow movement a chaste solemnity, and the final heavenly vision is beautifully sung by the creamy voiced Della Casa. This Mahler’s Fourth falls closer to Boulez’s objectivity than to Bernstein’s emotionalism and remains today what it was when recorded — one of the best Mahler Fourths in the catalog. It’s also one of the best-sounding, as RCA’s Living Stereo engineering holds its own even after decades.